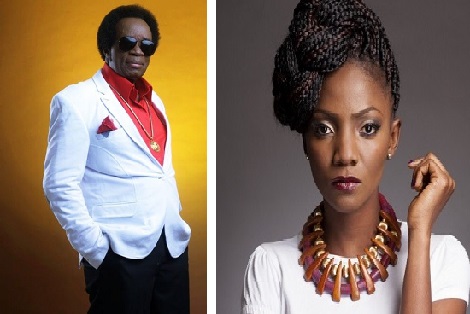 You all remember veteran singer and guitarist, Victor Uwaifo, once sued Simi for the sum of fifty million naira for alleged theft of intellectual property.
The legendary musician has now opened up on why he filed a law suit against the talented songstress. He was on an exclusive interview with Sahara Reporters recently after his performance at the recently held National Festival of Arts and Culture in Edo State and it was in the interview he shed light on the reasons he sued Simi for alleged theft of intellectual property. He said; “We’re in court already, I sued her at the federal high court for N50 million. They will be coming to court”

When Sahara Reporters asked if Simi had reached out to him privately, he answered: “No, only through her lawyers. We will meet in court.” Over a year ago, the veteran singer had revealed Simi was in trouble for failing to give him credit on her song; “Joromi.” The song title was originally coined by Uwaifo, hence, the reason he is upset with Simi for not giving her credit on the song.

He had said, when asked if he was going to take any legal action against Simi, “One after the other. I cannot just take everybody to court at the same time. I don’t know whether he or she; I know she is but I know somebody is behind it”

“An LP was sent as a compliment; I’m still looking at it but they were planning to come to Benin to see me. Up till now, they haven’t come. So I’m just putting that one on hold. ‘Joromi’ is a franchise”

“The name never existed before. Benin don’t have ‘J’ in their language. If any started with ‘J’ in Benin then it is fake. All consonant words start with vowel sounds. For example, if I use the trademark of one of these soft drinks, it is wrong. So Simi is in trouble.”

Loading...
Newer Post
“Wizkid Took My Virginity Away” – Teni Shares
Older Post
Your Whole Life Savings Is Not Up To 30% Of My Show Fees – Davido Slams Human Right Activist…