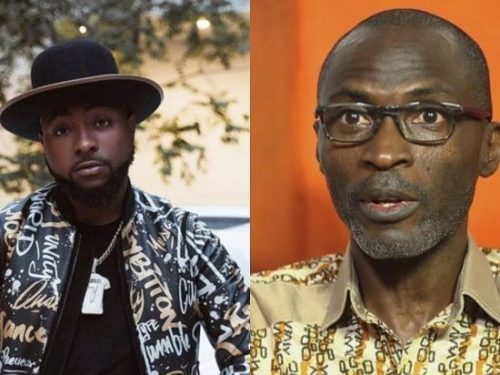 Davido has slammed popular human right activist, Kayode Ogundamisi on Twitter.
This happened after the human right activist made a post on Twitter that has to do with an alleged display of tyranny by Davido after he ordered the girls who accused him wrongly to be picked up by people who allegedly are not law enforcement agents. Davido who happened to have found the tweet insulting as his uncle’s name, Ademola Adeleke was mentioned in the post, responded almost immediately, slamming Kayode and dragging him to the mud.

This little piece of Twitter brouhaha has now caused everyone to be awaken as there have been a lot of reactions to the matter since it started.

It pains you that someone half ur age that you can give birth too is Greater than you will ever be … U are a loser , a disappointment…… ur are useless ! Now keep my family name out ur mouth ! Ur whole life earnings no reach 30 percent of my show money and it hurts I know https://t.co/QwZkTlTI3U