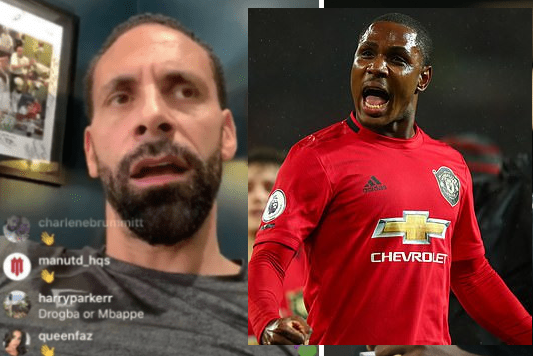 Manchester United legend, Rio Ferdinand has backed the club to sign Odion Ighalo permanently at the end of the season after his rapid rise with Premier League side.

The Nigerian striker, 30, has scored four goals in his first eight matches for Manchester United since joining the club on loan from the Chinese Super League, Shanghai Greenland Shenhua in the January transfer window.

On Tuesday (Mar.25), it was reported that Manchester United have decided to pay up to £15million this summer to sign Odion Ighalo permanently as his temporary move from Shanghai Shenhua is set to end on May 31.

Discussing the transfer rumours during a Q&A session with his Instagram followers, ex-United defender Ferdinand said: ‘Wow, eight games, three starts in that, four goals and one assist. Ighalo, do you sign him for Manchester United now?

The 41 year also admitted that he was unsure when Manchester United signed Odion Ighalo , but he has now been convinced coach Ole Gunnar Solskjaer made the right choice when he brought in the Nigerian star.

All them people that out there that were saying: “What are we doing signing Ighalo? What’s going on? What’s Ole thinking?” – I was one of them, I have to admit it. “Ighalo’s been in China, the league’s nowhere near what the Premier League is so how’s he gonna get up to speed? Is he gonna be ready straight away? We need somebody to come and make an impact immediately. Coming from China, impossible”. Well he’s proved us all wrong.

‘This boy looks like he’s happy to be here: “Whatever you tell me to do I’m gonna go out there and do it to the best of my ability. I’m gonna give you 100 per cent every day in training and in matches because I love this club and I want to do right by this club”. I love it.

‘It’s shocked me to see what he’s done. Listen, we’re not talking like he’s turned Man United into world-beaters but United needed something and he’s brought it in and given it and that’s all you can ask for. ‘

And I think he’s warranted the opportunity to come in as a full-time player and what he’s given Manchester United which they didn’t have is someone they can pass the ball into and can hold it up, he’s got a physical presence, he can hold off a defender or two and lay the ball in for someone else to score.’

Ferdinand also said that he believes Rashford, Anthony Martial and Daniel James benefit from Ighalo’s added experience to the team, just as Wayne Rooney and Louis Saha did when Larsson joined on loan back in 2007.

‘Rashford, when he’s fit, will appreciate playing with someone like this,’ Ferdinand continued.

‘He can have the impact of the Rashfords, on the Martials, on Daniel James etc. that someone like Henrik Larsson can have on the likes of [Wayne] Rooney and [Louis] Saha when he was there. That little bit of experience. ‘He’s got something that’s different to all the other guys in the team and you need that sometimes.’

Watch the video below.

Loading...
Newer Post
‘Cristiano Ronaldo is better than Lionel Messi… but I’m the best’ – Brazil legend Pele declares himself the greatest ever
Older Post
Runtown To Donate N10 Million To Nigerians That Can’t Afford To Stock Up During Market Shutdown