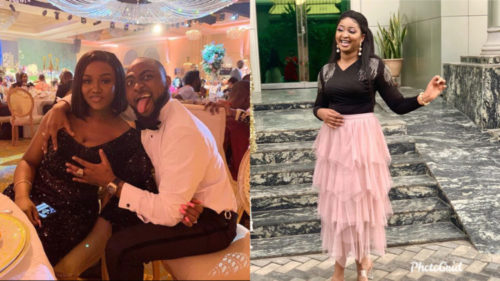 Controversial Nollywood actress, Etinosa Idemudia got the bashing of her life after she dropped a negative comment on Davido’s Instagram post.
At his elder brother’s wedding, Davido took to his Instagram to share a photo of him placing his hands on the breasts of this fiancee, Chioma Rowland with the caption, “All mines, Fuck ya all” and fans trooped into the “Risky” singer’s comment section to gush at their cuteness.

However, Etionsa who could hold her excitement upon seeing the picture left a rather disturbing comment which angered fans. She wrote, “Not ordinary fuck yall oh. Heavy FUCK YALL. In fact Fuck yall with a touch of Ogun kee yall. This family is blessed and kept from all evil eyes. Amen ”. The singer’s fans quite upset slammed her with derogatory words.

See the photo below

Etinosa receiving it hot for crying more than the bereaved.👀