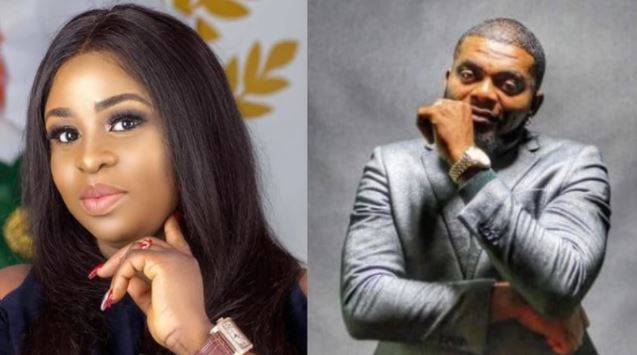 Sensational singer, Kelly Hansome has slammed his baby mama Ronke Moradeyo for exposing their daughter to her wild and irresponsible lifestyle. It wo

Sensational singer, Kelly Hansome has slammed his baby mama Ronke Moradeyo for exposing their daughter to her wild and irresponsible lifestyle.
It would be recalled that sometime this year, the singer shared messages he got from Moradeyo threatening him and also calling him a dead beat dad. However, it appears their beef has taken another turn as he called her out for taking their daughter to hotels to sleep with men.

In his words; “Let me just say this, I do not want anybody to put their mouth in what’s going on between me and my daughter. The mama dey carry her go hotel go f**k! The mama dey carry her go do stupid things, dey dance to songs wen she nor supposed to dance to. I gave her a phone and over a year I have not spoken to my daughter and you are telling people that I don’t want to talk to my daughter. Which means you are just trying to set me up. You plan with evil people to tarnish my image and frustrate my career and I didn’t know.

All the things and names of people wen you don confess to how you take spoil my name, I have all the confessions. All the receptionists of the hotels wen you don go wen I don bribe, I have it. I will publish it in due time. I don’t anybody to come and appeal ‘small pikin’ I dare any celebrity to come and say ‘Oh Kelly you are supposed to do this one’ then dem go tell me wetin dem talk wen she say I be deadbeat dad.”

To whom it may quansan, better be guided before talking sh** because you no go fit hold me o, hmm trust me. Juju never fade? E don fade now but someone will pay for all the damage done. If they act stupid, we gon act stupider because we’re stoopider than them. Ozuo.?