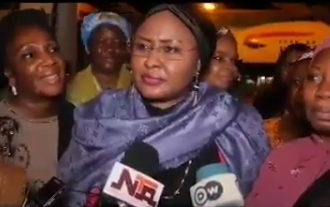 As the controversy in the presidency continues, here is a video of Aisha Buhari confirming that Mamman Daura’s daughter, Fatima, filmed her when she lost her cool during a heated argument in 2017. She said this while speaking with newsmen shortly after her return from London on Sunday November 13th.