DJ Cuppy has shared how Teni comforted her with kind words to encourage her ahead of her forthcoming EP and we absolutely love women supporting women.
DJ Cuppy is preparing to release her first body of work “Original Copy” soon and ever since she made the announcement of the forthcoming project, its been more of trolling from internet users. Cuppy recently took to the gram to reveal how she’s been feeling down lately because of the stress of trying to put everything together and Teni who has been in such a situation was quick to comfort her.

The “Gelato” singer took to the gram to share a photo of the billionaire’s single call to her. According to her, Teni spent hours on the phone encouraging her with kind words. She added that Teni told her that she went through the same ordeal when she was working on her first project and juts like Cuppy, many did not believe in her. Cuppy also stated that she feels much better after discovering that she wasn’t the only female artiste going through such.

She wrote: “Just when I was giving up… Teni called me with the encouragement I needed. This superstar literally sat with on the phone with me heard me out. She then told me she’s been through the same thing when she was working on her first project. People didn’t believe in her. I’m not alone.”

See the photo below; 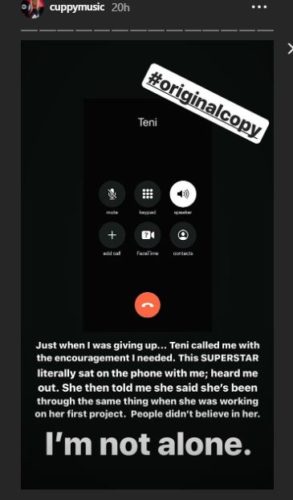