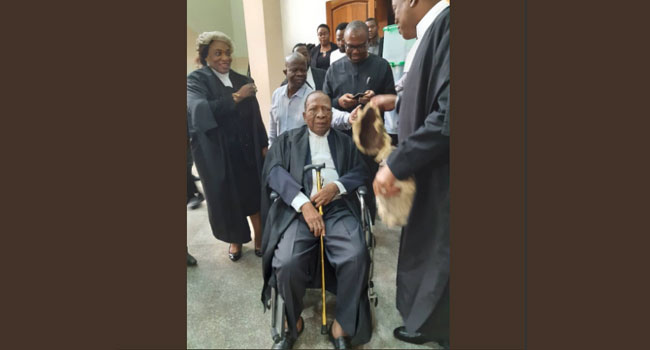 Foremost constitutional lawyer, Prof. Ben Nwabueze (SAN), is leading the legal team of Atiku Abubakar and the Peoples Democratic Party (PDP) in their petition against the election of President Buhari.

Nwabueze, who came in on wheelchair at the commencement of hearing on Thursday, announced appearance as lead counsel for the petitioners. He prayed the tribunal to allow him use his wheelchair due to his age and health situation. However, shortly after other parties announced appearances, Nwabueze said Dr Levy Uzoukwu (SAN) would take charge of Thursday’s proceedings.

However, just as Uzoukwu stood up to introduce the petition, counsel to the respondents raised an observation which prompted the tribunal chairman, Justice Mohammed Garba, to stand down the matter for 30 minutes. Mike Igbokwe (SAN) informed the tribunal that parties agreed to file and exchange documents to be tendered but that they were only served Thursday morning with the documents and were yet to read and know the contents of the documents.

The petitioners had brought before the tribunal, boxes of electoral materials in which they intend to lead evidence. The states include Niger, Yobe, Kebbi, Jigawa. Igbokwe told the tribunal that he was surprised to see documents from four states instead of the two in the schedule and urged the tribunal to suspend trial until the scheduled documents were exchanged and served.

The counsel to the Independent National Electoral Commission (INEC), Yunus Usman (SAN), reacting, said the action of the petitioners is a serious ambush and prayed the tribunal to order parties to iron out documents to be considered. The counsel to the All Progressives Congress (APC), Yakubu Maikyau (SAN), aligned himself with the submission of INEC.

Responding, Uzoukwu expressed surprise over the reaction of the respondents recalling that parties at the conclusion of pre-hearing agreed that hearing in the petition would start Thursday, adding that the documents before the tribunal have been listed in the petition.

He said the petitioners by their actions want to compromise the time allotted to the petitioners and urged the tribunal to go ahead with the day’s proceedings, adding that the petitioners intend to start with Niger State. Responding, the Tribunal Chairman, Justice Garba, announced a stand down of the petition for 30 minutes to enable them take a decision on the matter.