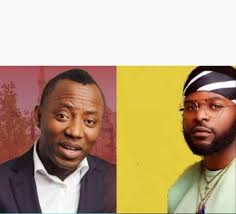 Falz The Bad Guy has taken to social media to frown against the arrest of politician and owner of Sahara reporters, Omoyele Sowore.

The comic rapper took to his Instagram page to experess his frustration at the insensitivity of the goverment as well as against her autocratic form of governing the nation which has led them to arresting the human-right activist.

He expressed that it was wrong for the former AAP presidential candidate to have been arrested by the government for planning to stage a “protest” which according to the constitution is legal. He also demanded for the immediate release of Sowore.

“What we are facing is a build up of the several years of neglect of the welfare of our people. Our government’s constant disregard of the loss of lives of many Nigerians.

“The ridiculous rate of poverty and unemployment that afflicts us. This is not a time to arrest anyone but to listen to the voices of the masses. Organizing a protest march does not in anyway amount to treason. #FreeSowore Immediately!”