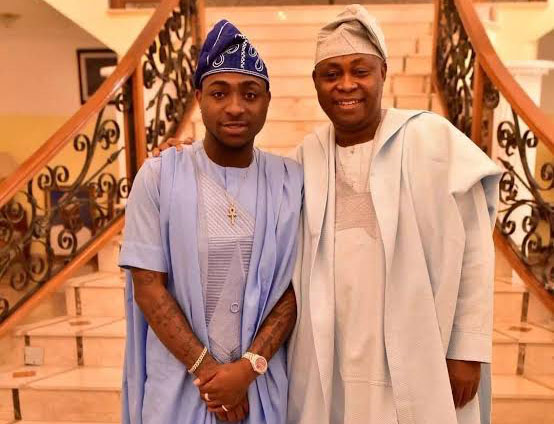 Davido’s excitement couldn’t be contained or digested alone after his billionaire father sent him a truly emotional message after his successful “A Good Time With Davido” concert at the Eko Energy City of the Eko Atlantic City in Lagos.
The superstar singer who went against his father’s wish of going into music seems to have now proven his father wrong and instead made him his greatest fan. Davido shared the Whatsapp message sent to him by his father on his Instagram Story some hours ago in which the pride, happiness, emotion, incomparable joy at which he had watching thousands of people troop out to watch his son perform was put in words.

Dr Adedeji Adeleke expressed from the deep-end of his heart his overwhelming feeling at the success of his son’s music craft and his prided to watch it happen.

He wrote; “My Dear son David, to God be the glory for the talent he bestowed on you. You gave an Excellent account of yourself at your concert. You exhibited Raw Talent, Genius, Industry Staying Power, Organization and Hard work. You came fully prepared and rehearsed. I am very proud of you as your dad and i will continue to pray for you and thank God for you. I love you added.”

He added; “I wished you had stayed 30 minutes more to play songs from your new album. You have a lot of very nice songs in your new album. People were not ready to leave when you closed the concert.”

"I wish you had like 30mins more to perform" – #davido 's Billionaire father showers praises on him after his successful #agoodtime concert!!!