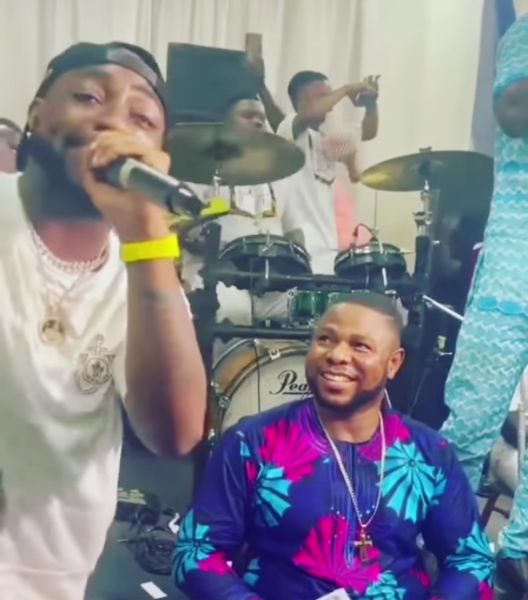 Nigerian-International Singer, Davido is on the News front page again, making rounds with some viral videos of himself with Gospel singer, Yinka Ayefe

Nigerian-International Singer, Davido is on the News front page again, making rounds with some viral videos of himself with Gospel singer, Yinka Ayefele and also Fuji singer, Pasuma at an Event.
David Adeleke (Davido) and Yinka Ayefele’s performance video is currently the Number 1 trending News online and as your No.1 Music blog we’re here to serve you the Gist!

Afrobeat and Pop singer, Davido attended a function at Abeokuta, Ogun State. Davido as a cruise master made sure his present was felt. The singer left his seat to join Gospel singer, Yinka Ayefele while he was performing live on stage. Davido went with A Full Bundle of One Thousand Naira Notes which amounts to the sum of 1 Million Naira. Yinka Ayefele at the sight of Davido approaching him began to sing Davido’s Mega hit song ‘Dami Duro (Emi Omo Babalowo)’. Davido climbed the stage and gifted Yinka Ayefele with the full bundle of One Thousand Naira notes.

Davido didn’t just bundle spray Yinka Ayefele, He also took the Mic from the performing Gospel singer. Davido doing what he knows how to do best performed his Dami Duro hit song with Yinka Ayefele’s Live Band. He also performed one other hit song titled ‘Money’ (which features Olamide Baddo) and handled back the mic to Yinka Ayefele.

While making his way back to his seat, Yinka Ayefele instructed and begged the mob crowd to create space for Davido. At Davido’s arrival to his initial seat, the DJ played his new joint with Small Doctor – ‘Man Dem Man Remix‘, and at the sound of his catchy line ‘No be say dem no get money, But E no Choke, Tule!’ the function went ablaze with excitement.